Another “convective Friday” is ahead of us. The unusually prolonged dry and warm period of the last few weeks seems to be the perfect environment for storm to be developed when an atmospheric depression approaches the UK. So, let’s have a look on the weather on Friday 27/7 based on the most recent prognostic data.

On Friday, we should expect gradually cloudy weather from west to east with some sunny spells in SE of England. During the day rainfalls will occur in Ireland, Wales, Scotland and western parts of England due to the passage of a cold front. After the midday-afternoon, thunderstorms will be developed along east coast, which may occur with particular severity in SE and east Anglia. During the night regions of SE Scotland may also be affected.

Southerlies will blow over the British isles up to 20-25km/h over land regions, up to 40-50km/h over maritime areas (especially in Celtic sea). The winds may differ in speed and direction at places, where thunderstorms occur.

The temperature will reach in SE England 29-32°C all these days till Friday, 25-27°C in central places and 18-22°C for the western parts of the UK and Ireland. The temperature will drmatically drop during the night not exceeding 23-25°C in SE on Saturday.

It should be noted that as we try to approach the situation of convective activity two days far, the actual situation on Friday may differ. We will keep you updated if it is necessary.

You can always check our live UK TEMPERATURE and PRECIPITATION maps and our live camera in LONDON.

If you are also interested in geology, fashion and gems you can join the fashionchroism blog and its facebook group. 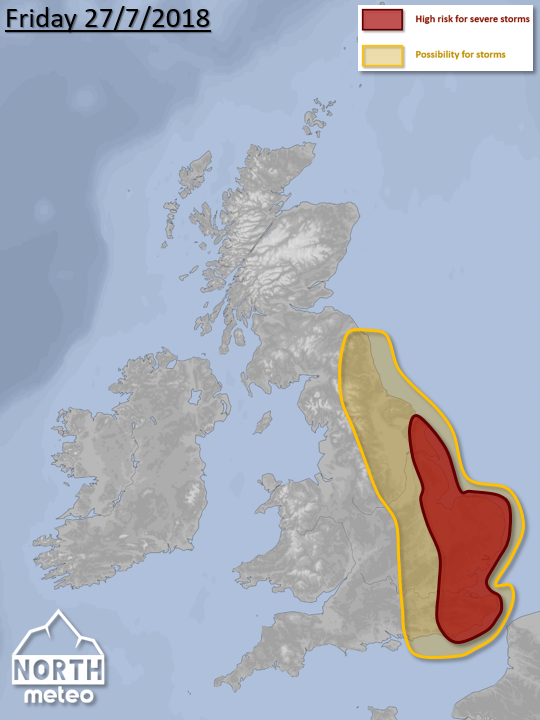