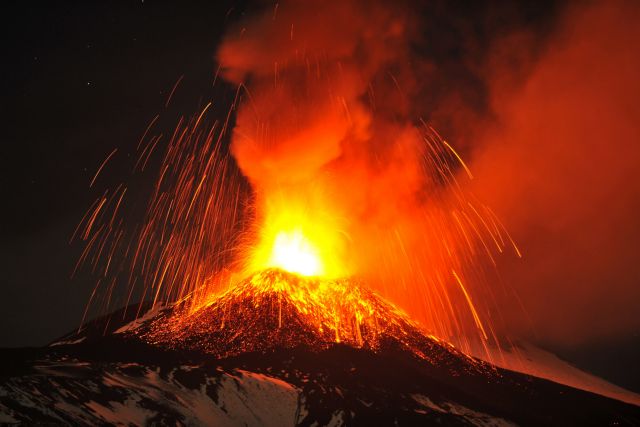 In this photo taken on Saturday, Nov. 16, 2013, Mt. Etna, Europe's most active volcano, spews lava during an eruption as seen from Acireale, near the Sicilian town of Catania, Italy. (AP Photo/Carmelo Imbesi)

The ash from the eruption of Etna volcano produced a cloud called pyrocumulus with a diameter of ~50km. How did this cloud form?

The eruption of the volcano of Etna cauesd the formation of a cloud at the east-southeast of the volcano of Sicily. Practically, we do not discuss the ash produced after the eruption, but the real atmospheric cloud produced through microphysical processes. The phenomenon was observed on Sunday 28/3/2021.

After the eruption, the sulfate particles, which were released in the atmosphere, were moved upwards. In particular, the heated air above the lava (which reaches 600-1100°C) was less dense and moved upwards carrying away the sulfate particles. When these particles reach a moist and colder regime, the water vapours are condensed on them. At temperatures <15°C, the water vapours can freeze upon the volcanic particles. Here, we remind that pure water does not turn to ice at 0°C, but at ~ -37°C. The exact freezing temperature depends on the composition of the particles.

In the case of Etna, as it can be seen in the high resolution image of the sateliite TERRA/MODIS (figure 1) in the visible channel, the volcanic ash (is distinct by brown-ish shades) was lead further to the east-southeast by the dominant west-southwest stream at ~5km of height. Finally the ash seems to move at altitudes >5km. This conclusion arises from the radiosonde data captured on 28/2/2021 (noon) over Trapani in western Sicily (figure 2). From the radiosonde, we consider that the most favourable layer for the formation of a cloud was this from 7km and higher, where relative humidity was >30%. Under this regime and a temperature <-40°C during that time and over that area, this pyrocumulus probably formed by the heterogeneous ice nucleation mechanism of contact freezing. In other words, the vapours froze immediately when contacting the volcanic ash. This cloud obtained an elliptic shape with dimensions of ~70x40km, as seen in the satellite image.

Figure 1 – Left: Satellite image of TERRA/MODIS over Sicily in the visible channel (worldview). Right: Wind speed and direction at 500mb/5km over Italy at 28/2/2021 12z (meteociel.fr).