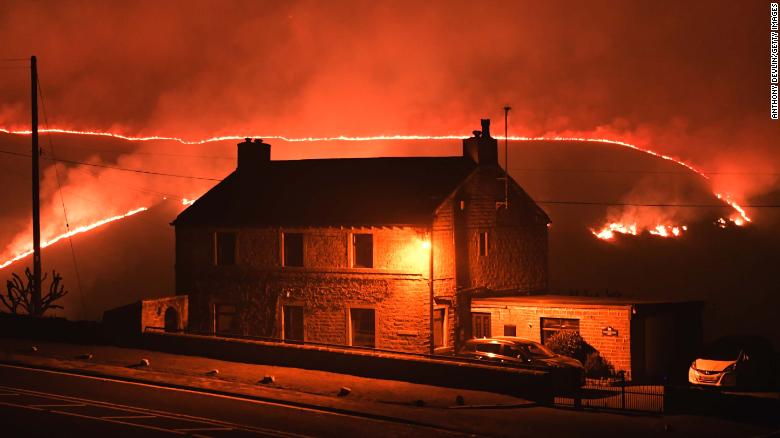 MARSDEN, ENGLAND - FEBRUARY 26: A large wildfire burns on Saddleworth Moor on February 26, 2019 near Marsden, England. Plumes of smoke were visible for miles, with published reports noting the blaze covered approximately 200 meters of the moor near Dovestone Reservoir. (Photo by Anthony Devlin/Getty Images)

(CNN) – Firefighters have contained a blaze that erupted on moorland in West Yorkshire in northern England, one of the three wildfires that broke out across the United Kingdom as temperatures hit record seasonal highs.

@BBCLookNorth devastating for the moors and it’s wildlife! Hope it’s soon out, this part of the moor is only just recovering from the last major fire! Massive well done to all the emergency services working hard to try and get this under control @wyfrs pic.twitter.com/AJljnhb7Pw

The fire, on Saddleworth Moor, burned throughout Tuesday night across about 1.5 square kilometers (370 acres) near the village of Marsden. Orange fire-line streaks and haze illuminated the dark sky.
“The fire now looks to be out,” the fire service’s official Twitter account tweeted Wednesday morning, adding that “5 pumps and 2 wildfire units are still at the scene and will remain there for much of the day to tackle any further hot spots.”

Other fires broke out in Edinburgh, on the city’s famed Arthur’s Seat hill, and in the southern English county of West Sussex, in woodland immortalized by A.A. Milne’s Winnie the Pooh stories.
The West Sussex Fire and Rescue Service blamed the “unusual warm weather this week in Sussex.”