You are here: Home / NORTH POLE 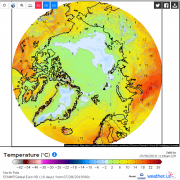 The warm air masses are now moving towards Greenland being definitely colder, but still warm. The temperature record is about to be broken this week.

The following map comes from the ECMWF global forecasting model and show surface temperatures around North Pole on 30/7/2019, 11am CDT. Eastern and western coast of Greenland may exceed 20°C. It should be noted that Iceland may record temperatures larger than 22°C.

In the middle of July, the mercury reached 21° in the Isle Alert located north of Greenland (and 90km south of the North Pole), breaking the previous record, which was 20°C in July 1956. It is highlighted that since 2012 a significant amount of warm days (with temperatures between 19-20°C) has been recorded in this station.

For now, the ice coverage seems to be within the lowest values have ever observed. Facing a fairly warm week (30/7-2/8/2019), there are concerns that the ice will significantly melt and the scientists follow the entire phenomenon and its progress in detail.